One Call Does It All

I’d be be happy to contribute some gas money to the cause. It’s a long road to Florida.

Note: Here’s the posting schedule for the rest of the week.  Special Thanksgiving edition tomorrow, and then no C&J Friday, though we’ll probably post a “Who Won the Week” poll in the diaries at our usual 7:30 time. Back Monday for the ceremonial fighting over the leftover gizzards. Bring sturdy body armor. —Mgt. 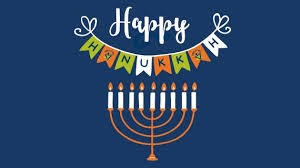 Days ’til the start of Hanukkah: 15

Percent of Americans polled by Harvard CAPS-Harris who say it’s time for Trump to concede: 58%

Percent who believe the vote-by-mail system was fair: 61%

Age at which Patrick Quinn, co-creator of the ALS “Ice Bucket Challenge” that has raised $220 million for research into the treatment of Lou Gehrig’s Disease, died Sunday: 37

Average cost of a Thanksgiving meal for 10 people, the lowest since 2010 according to the American Farm Bureau Federation, with a 16-pound turkey going for $19.39: $46.90

Rank of “sausage stuffing” and “gravy”, respectively, among Thanksgiving dishes searched online most often in Joe Biden’s Delaware and Kamala Harris’s California, according to Google Trends: #1

Mid-week Rapture Index: 182 (including 3 gogs and 1 pair of sinner’s glasses).  Soul Protection Factor 8 lotion is recommended if you’ll be walking amongst the heathen today.

Puppy Pic of the Day: Hello…

CHEERS to today’s top story. Ladies and gentlemen, this election is over. The greatest state in the union has officially certified its votes and, by god, it’s a beautiful sight:

Maine has certified the results of the 2020 election, Secretary of State Matt Dunlap said Monday. … Dunlap said he handed the certified results to Democratic Gov. Janet Mills at 2 p.m. on Monday, the day they were due.

The final result: Joe Biden got 1 Electoral vote for winning the 1st district and 2 EVs for winning the overall state vote, and Donald Trump got one electoral vote for winning the pro-pussy-grabbing 2nd congressional district up north. By my math—and my math is the best math—that’s a final count from the state of Maine of 270-1. Congratulations, President-elect Biden. I hope you don’t mind I took the liberty of activating your official transition site and organizing your inauguration in a pandemically-sensitive way. But now I have to take the dog out to pee, so you can take it from here. Good luck, sir. We’re all counting on you.

CHEERS to confronting the XY-chromosomed bullies among us. Today is International Day for the Elimination of Violence Against Women. And like all events, the pandemic looms large over this year’s observances. The United Nations provides a little reminder that… 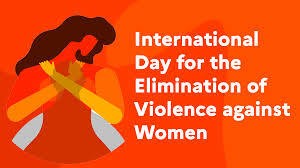 Violence against women and girls (VAWG) is one of the most widespread, persistent and devastating human rights violations in our world today and remains largely unreported due to the impunity, silence, stigma and shame surrounding it.

To further clarify, the Declaration on the Elimination of Violence Against Women issued by the UN General Assembly in 1993, defines violence against women as “any act of gender-based violence that results in, or is likely to result in, physical, sexual or psychological harm or suffering to women, including threats of such acts, coercion or arbitrary deprivation of liberty, whether occurring in public or in private life.”

Just as pink is worn for breast cancer awareness and Red is worn for AIDS awareness, the U.N. urges everyone to wear and/or display orange between now and December 10 to show support for the fight to prevent violence against women.  On this site I don’t think that’ll be a problem.

CHEERS to another crack in the glass ceiling. President-elect Biden, brilliantly generating momentum toward his inevitable January 20 swearing-in, released a flood of cabinet nominees this week. Among them is Janet Yellen, 74, who is now poised to become the first woman Treasury Secretary. In a preview of her overall approach to her job, President Barack Obama said this about Yellen when he nominated her to be the first person with lady parts to be the Federal Reserve Chair in 2014: 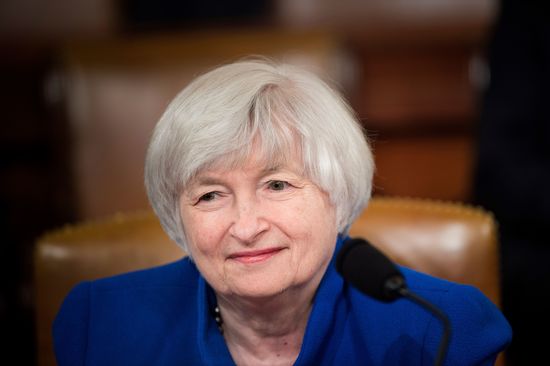 “The American people will have a fierce champion who understands that the ultimate goal of economic and financial policymaking is to improve the lives, jobs and standard of living of American workers and their families.

She understands that fostering a stable financial system will help the overall economy and protect consumers.

I am confident that Janet will stand up for American workers, protect consumers, foster the stability of our financial system, and help keep our economy growing for years to come.”

Among the items on her agenda: unblocking Steve Mnuchin’s misogynist logjam on the new Harriet Tubman $20 bill that was supposed to be released this year. But first, once confirmed, she’ll spend a few hours rolling around in a giant pile of money shouting “Yippeeee!!!!”  (I hear it’s a sacred tradition going back to Hamilton.)

“It’s working!” Check out the critters big and small who are using Utah’s first wildlife overpass to cross Interstate 80. The @UtahDWR shared this video on Thursday. pic.twitter.com/H7d896eiYs

JEERS to Reagan’s impeachment-worthy moment. On November 25, 1986, the Iran Contra “Affair” busted wide open when Captain Shining City On A Hill appointed the Tower commission to find out what the $#!!#$ was going on.  It later resulted in this public admission from Reagan:

“A few months ago I told the American people I did not trade arms for hostages. My heart and my best intentions still tell me that’s true, but the facts and the evidence tell me it is not. 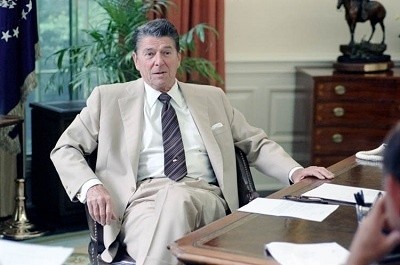 Thankfully, he was finally impeached & convicted for wearing a tan suit.

As the Tower board reported, what began as a strategic opening to Iran deteriorated, in its implementation, into trading arms for hostages.  This runs counter to my own beliefs, to administration policy, and to the original strategy we had in mind.”

Eleven people ended up getting nailed, but George H.W. Bush pardoned them before he left office.  Some of the Iran-Contra figures, like Elliott Abrams and John Negroponte, would pop up again in the Bush II administration despite the stains on their names.  Abrams is still stinking up the place as Trump’s special something-or-other to Venezuela. And a couple years back the NRA tapped convicted felon Lt. Col. Oliver North to serve as president, a role he quickly left because that domestic-terrorism was too corrupt for him.  And George H.W.’s attorney general Bill Barr, who supported and encouraged pardoning all those criminals, became Trump’s…wait for it…attorney general!  Because truly scurrilous help is so hard to find.

CHEERS to mostly smooth sailing. If you’re traveling today in your 2020 Tesla electric jetpack, you might get a sprinkle or two in the middle of the country. But other than that, it looks fine. Meanwhile this is what the Turkey Day map looks like, according to CNN’s Atari 2600 forecast computer: 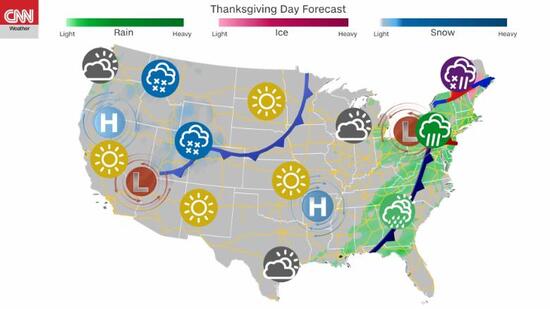 Be very careful in the southwest & Lake Erie regions, where giant spinning lozenges may form.

The gays, feminists and pagans are quick to point out, by the way, that any weather messes this holiday are not their fault.  Responsibility rests solely on the homophobes, the Nazis, the KKK, and their cousins the conservative Bible thumpers. It’s residual from their huge 2020 election loss—their feelings are still delicate and tender. Hence the overall holiday outlook: scattered annoying snowflakes.

CHEERS to new rules.  Starting January 1, health insurance companies have to spend at least 80 cents of every dollar on actual health care coverage.  Not advertising.  Not lobbying.  Not junkets or bonuses.  Health care coverage.  Of course, the industry must be screaming about The Unfairness Of It All, right?  As usual…not so much, now that the fight is over:

[I]ndustry watchers said the final regulations wound up being more manageable than investors initially feared.  Analyst Les Funtleyder, who covers the industry for Miller Tabak, noted that HHS has wide latitude to adjust the rules to prevent market disruptions.  “From an expectations point of view, these are rules that managed care can live with in 2011,” he said.

Not that it’ll stop Republicans in Congress from pissing and moaning.  Which, coincidentally, constitutes at least 80 percent of what they spend their time on.

And just one more…

CHEERS to sweet sounds. The Grammy nominations were announced yesterday and you can check out all the nominees here. I always go to the Spoken Word category first, because there’s a good chance it’ll have an Obama or a Carter or a Maddow on it. And this year…there is!

Flea: Acid for the Children

That last one isn’t officially on the ballot yet, but Rudy Giuliani is suing in all 50 states to get it added, and when has he ever lost?

Taylor Swift, Beyonce, and Lady Gaga got their usual 150 nominations each, and my all-time favorite composer, John Williams, got his 72nd nod (for his Rise of Skywalker score).  Other notables on the Grammy list: James Taylor, Rufus Wainwright, Vince Gill, Ricky Martin, and a very posthumous one for Leonard Cohen. Trevor Noah hands out the awards on January 31st. And those kids better keep the noise down or I’m calling the police.

Have a happy humpday, and if you won’t be here tomorrow we’ll say it now: Happy Thanksgiving!  Floor’s open…What are you cheering and jeering about today?

Markos Moulitsas Fuming That the Cheers and Jeers Kiddie Pool is Filled With “Fools That Are Making Him Look Bad”: Report