While COVID-19 has rained on a lot of our parades, it hasn’t dampened the spirits of these 15 kids. Whether it be singing a song of encouragement, sewing masks for first-responders or even creating videos, these kids are doing good deeds and helping others, showing us how they can make a difference in our world if given a chance. Keep reading to learn more about these young community leaders. 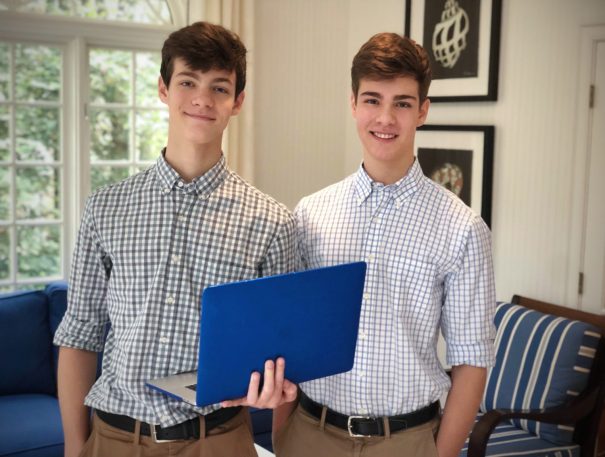 When the COVID-19 pandemic forced schools online, Alex and Ben Joel were concerned by the articles they read about potential learning losses due to distance learning. So they did something about it. Their motto is simple: Bridging the educational divide with free, online, one-on-one tutoring for elementary school students. We caught up with the dynamic duo to find out more about their service, what inspired it, and how Intutorly is helping change the world, one kid at a time. 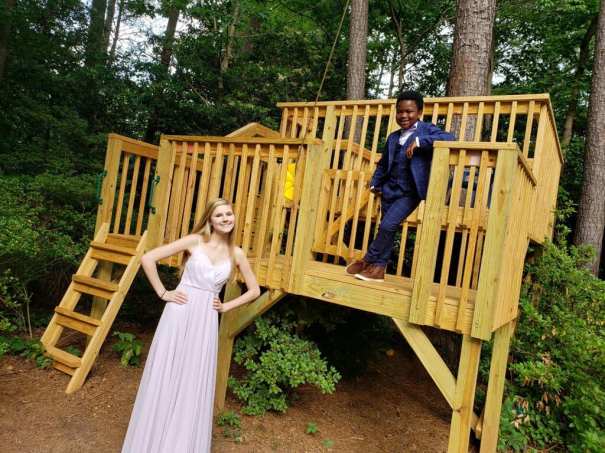 Curtis Rogers Created His Own Prom

Talk about special. Curtis Rogers, a seven-year-old boy, felt bad that his babysitter would not be able to attend her prom due to the coronavirus, so he decided to create one himself including a “promposal” banner that read, “Mini-Prom is not today, but will you join me on Monday?” Of course, Rachel Chapman said yes. “I decided that we should just do this now because the coronavirus has people down in the dumps,” the boy told CBS News.

He dressed in a suit and bow tie, and she wore an elegant gown, and they stood six feet away from each other with the help of a pool noodle. The table was decorated with fresh flowers and a meal of Chick-fil-A, and smoothies were served followed by dancing. He’s a keeper.

Back in December, 17-year-old Avi Schiffmann decided to use his computer knowledge and create a website that tracks the coronavirus before the virus had even left China. The NCOV2019 website contains information on global and local stats, a preparation guide, a question and answer section and a map showing the outbreaks of the virus. It’s pretty incredible.

“I noticed there was so much misinformation,” Schiffmann told the Mercer Island Reporter. “It was so hard to just get clear and concise data. So I thought, ‘Well, I can do better than the government,’ so I just made it. I reached out to news agencies, just for fun. None of them replied. And now they’re coming back to me, which I find so funny.” 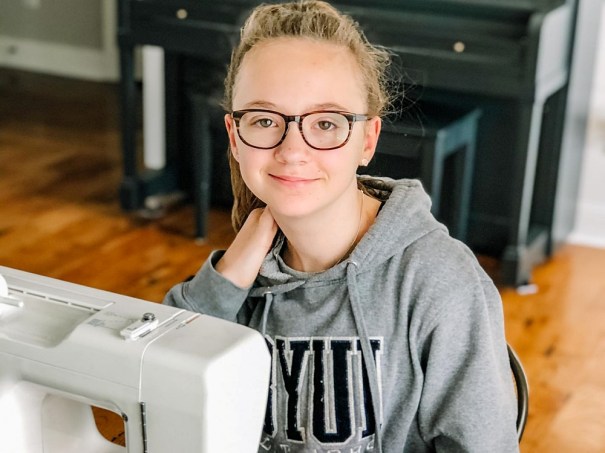 Over in Tennesse, Veronica Blaylock taught her daughter Lucy how to sew when she was just eight-years-old. Together, they started making flannel “love blankets” for other kids each with a signature Lucy heart sewn in. The blankets have been shipped to 13 countries and given to children who have been bullied, have been fighting cancer, have lost a loved one, etc.

Lucy is 11-years-old now and busier than ever with Lucy’s Love Blankets, but things have changed a bit this year. “Because of COVID-19, we decided to put the love blankets aside for a minute and start making masks,” Lucy told The Tennessean. Together, Lucy and her mom have sewn and given away hundreds of masks to healthcare workers. In fact, on May 26, Lucy had sewn her 1100th mask!

Sydney Made a Video Series

Sydney Dilling’s reaction to COVID-19 wasn’t much different from other 10-year-olds. She became nervous and uneasy. Knowing that she wasn’t the only one with these types of feelings, she and her mother decided to do something about it. Together, they wrote, recorded and even animated four short videos entitled, “Kids Coping with COVID-19” right in their own living room. They can be found on YouTube.

“I hope our animations can help kids everywhere,” says Sydney on episode three of the series. She also requests that local schools donate surplus supplies too since they aren’t using them. “It never hurts to ask!” Sydney told Good News Network. 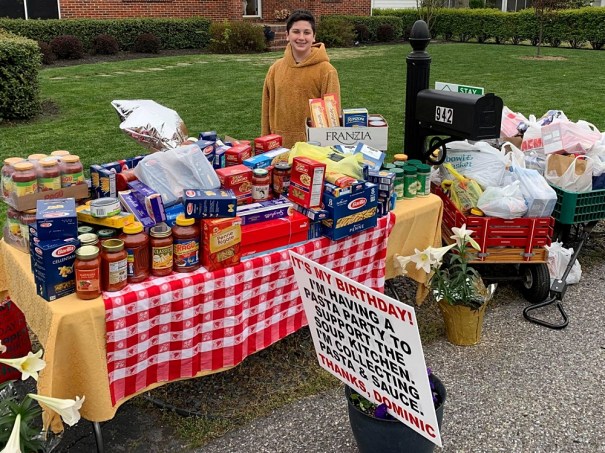 In New Jersey, 12-year-old Dominic Mercado decided to forgo the usual birthday festivities this year and instead, he asked for boxes of pasta and jars of spaghetti sauce for the local food kitchen in his hometown. Spirit & Truth Ministries told ABC 7 TV that his donation was by far the largest they’ve seen in years. It took five SUVs just to haul of all of the food away. His effort even caught the attention of New Jersey Governor, Phil Murphy. Over 100 people drove to Dominic’s home to deliver the goods.

“They might already have food for this week and next week, so these items won’t expire for a while. (The food) won’t perish for a while,” Dominic said.

Layla Sang to Her Teacher

Sometimes it’s the simplest things that make the biggest impact. Take, for instance, nine-year-old Laya DeMayo from Long Valley, NJ. She heard that her teacher’s favorite song was “Don’t Stop Believing” by Journey and decided to give Mr. Dauchert his own private concert on Ukelele.

“It meant more than any gift that I have every unwrapped in my life,” Dauchert told ABC 7 News. “And just thinking that during these challenging times, ‘Don’t Stop Believing,’ how appropriate is that?”

“I hope that during this hard time that we are going through right now, I hope that this song makes everyone a little more,” says DeMayo. 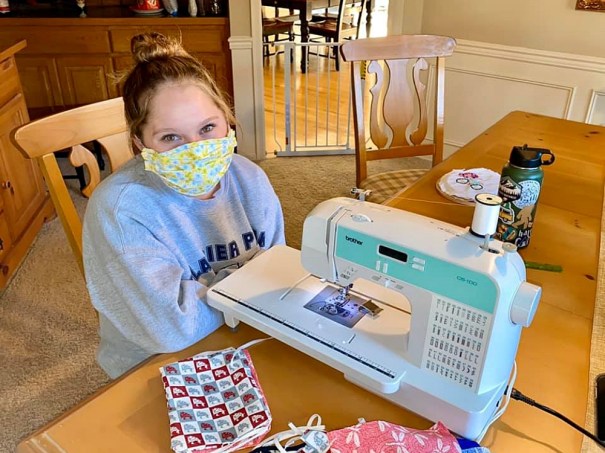 In Seattle, young entrepreneurs 13-year-old Marley and 16-year-old Zoe Macris began their Scrunchies By Mar business in March of 2019. Then COVID-19 hit, and the girls decided that they would need to pivot a bit. They put aside their scrunchies and made room to sew face masks for nurses, firefighters, the police and others on the frontlines for free using donations given to them from others. They made 300 masks in just the first few days of operation.

Working together isn’t always for the pair. “We’re sisters, it’s not always the best thing in the world but we make it work, Zoe Told Seattle Refined recently. “We have our moments, but for the most part we really get along.” And Marley agrees, saying, “It feels good knowing that you’re giving back to the community.” 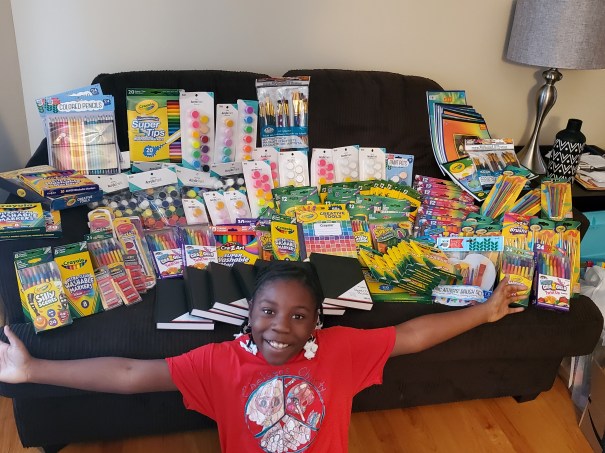 According to her mom, Chelsea Phaire has been begging her to start her own charity since she was seven years old. This year when she turned 10, she got her wish. When the girl from Danbury, Connecticut sent invites for her friends to attend her birthday party, she requested that they bring art supplies so that she could donate them to others. Today, Chelsea’s Charity has sent over 1,500 art kits to homeless shelters and foster care homes to give these kids a little boost. Contained in sturdy plastic boxes, these kits contain markers, crayons, colored pencils, paper, coloring books and gel pens.

“I feel good inside knowing how happy they are when they get their art kits,” Chelsea told CNN. “I have definitely grown as a person because of this. Now my dream is to meet every kid in the entire world and give them art. Who knows, maybe if we do that and then our kids do that, we’ll have world peace!”

Stephen Made a Hand-Washing Station

Even though his village, Mukwa, in Bungoma County, Kenya, hasn’t seen a single case of COVID-19, nine-year-old Stephen still wanted to help. He designed a hand-washing machine that tips water from a bucket with the use of a foot pedal to avoid touching surfaces to help reduce infections. Stephen told BBC he came up with the idea after learning about preventing infection on the TV. “I now have two machines, and I want to make more,” he says. On June 1st, he was Presidential Order of Service, Uzalendo (Patriotic) Award. Stephen says he wants to be an engineer when he grows up, and his father says the county governor has promised him a scholarship. 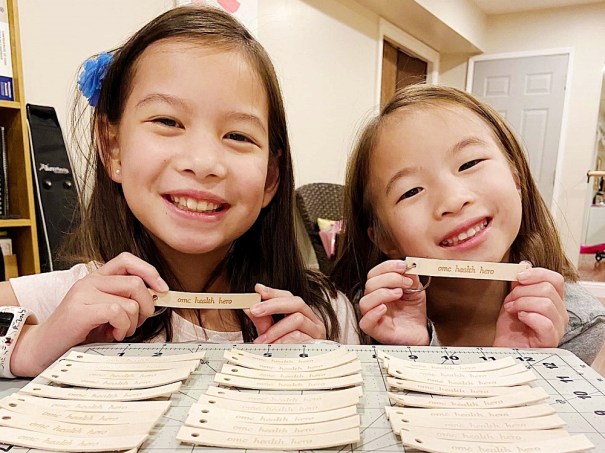 Brianna and Ashley Made Keychains

Two years ago, Brianna and Ashley Wong received a catalog during Christmas time that would donate ducks and chickens to people in need in other countries, and that really struck a chord with the girls.

“Since we didn’t have enough money from our piggy banks, we decided to earn money by making bracelets and other things,” says nine-year-old Brianna, who started the company Duck + Chick with her six-year-old sister. “We use part of the money we make to donate to different organizations. So far we have donated to Heifer International, World Vision [and] Compassion.”

When COVID-19 hit, the East Bay kids switched gears and starting making keychains to raise money for their local No Kid Hungry program while their local schools are closed. The girls recently posted a video on their Facebook page showing other kids how to make leather nametags.

Christian Made Some Phone Calls

After noticing the effects of COVID-19 had on his community, 12-year-old Christian Willis decided that he wasn’t just going to sit back and watch. He was going to make a change.

“He independently ran everything himself, and I was just like really proud of him,” his mother Shante told WTOP News. “To him, it’s like, a loaf of bread can get them sandwiches for a week. I think it made him realize that he is making a difference.”

Christian simply picked up the phone and began calling friends and family asking them for donations for the House of Mercy in Manassas, VA. Those calls paid off as he was able to collect $900 for the cause. 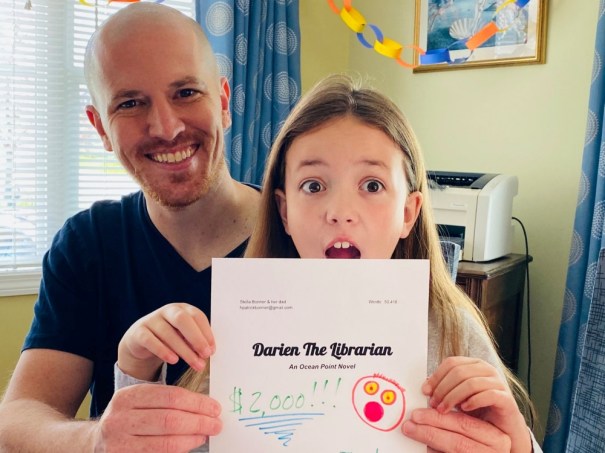 The tale begins like this … before COVID-19, Patrick Bonner would make up bedtime stories for his daughter Stella to help her get to sleep. After adding on “chapters” to this never-ending story, the ten-year-old suggested that they write down their thoughts on paper. When they got quarantined together, the two got serious creating “Darien the Librarian.” The 50,000-word book is about a girl who can magically jump in and out of books.

“My dad wanted to publish, it but I didn’t want to,” Stella told WCVB5 News. “I wanted to make a fundraiser about it because we already have all the money we need. What would we do with the extra? Some people can’t put food on the table.” The initial goal was to make $500 that they could give to Feeding America. As of May 26, Stella’s book had raised over $26,000 on their Facebook page.

How to Cultivate Positivity to Combat COVID Stress

The post 15 Incredible Kids Who Stepped Up in 2020 appeared first on Red Tricycle.