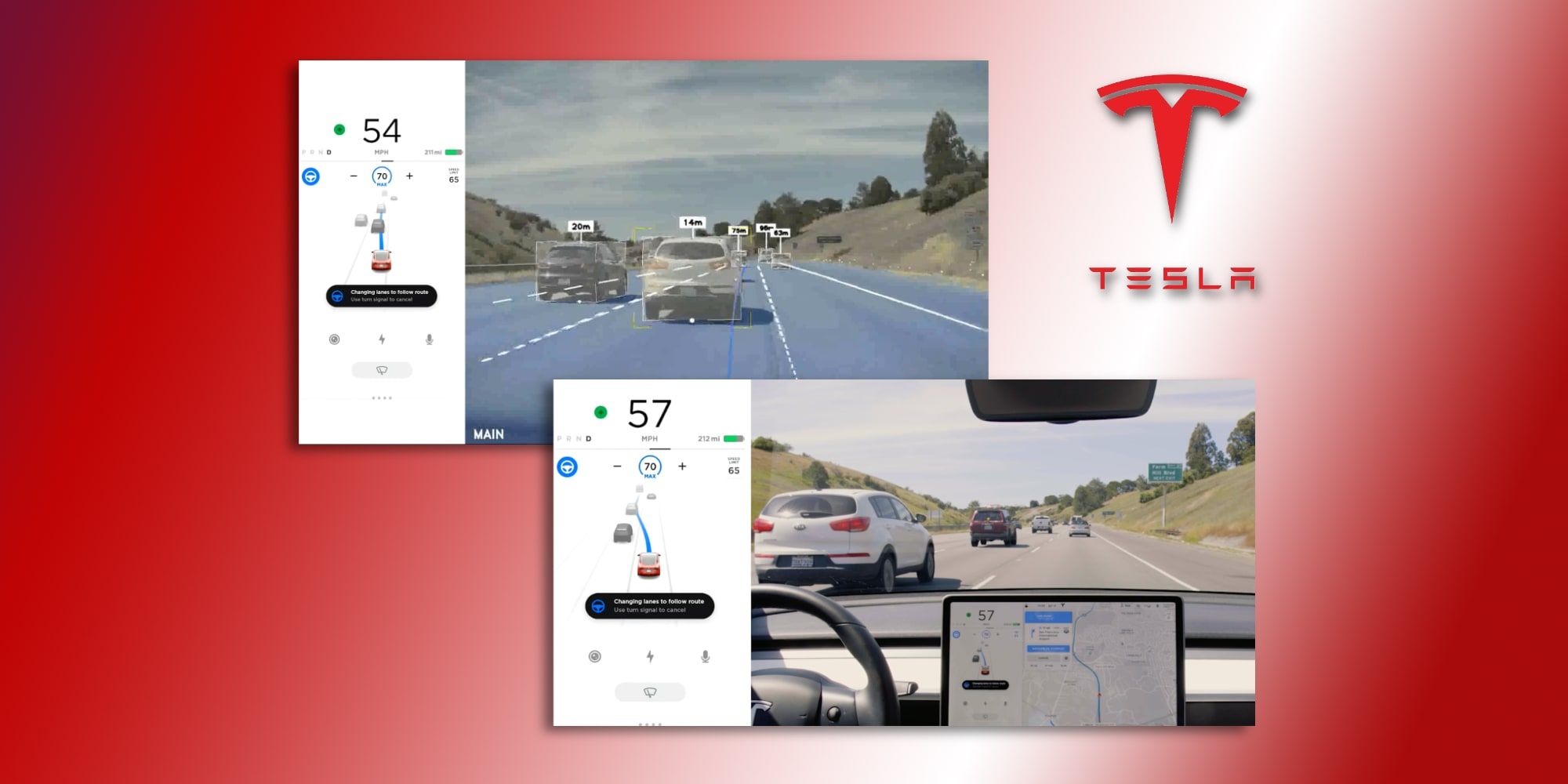 A Tesla recently navigated from San Francisco to Los Angeles with almost no human intervention using its Full Self-Driving feature. This demonstration was presented in time-lapse so the entire ride, six hours if driven non-stop, is shown in just over fifteen minutes. The return trip was also completed successfully, without the need for any corrections by the person driving.

Tesla’s Full Self-Driving (FSD) feature is currently in beta testing, with a larger rollout coming this year. Tesla vehicles can’t legally drive without a human driver behind the wheel but, after passing regulatory hurdles in the future, FSD may be able to handle CEO Elon Musk’s eventual goal of driving without a human monitoring. Since a computer can access and more quickly adjust to data faster than a human, future self-driving cars should be safer overall. All Tesla cars made since October 2016 include updated Autopilot hardware and while not as exhaustive as Full Self-Driving, these systems have provided a large amount of data to inform Tesla’s machine learning software. Whether Autopilot or FSD is on or off, the system is still analyzing the data and learning from real-world experiences.

A video posted recently by Whole Mars Catalog demonstrated a Tesla operating with Full Self-Driving in a time-lapse drive from San Francisco to Los Angeles. With FSD enabled, an enhanced visualization of how the Tesla views traffic and identifies objects is shown on the touch-screen, which is fascinating and informative to see. The driver noted that two stops had to be made for charging, but that a Model S with a 400-mile range could make the trip on a single charge. More notable, there were two occasions where the human driver appeared ready to take control to perform a manual correction. In the second instance, the danger was considered significant enough that the driver did override the computer momentarily. Tesla has hundreds of thousands of cars on the road with self-driving hardware, but despite this massive amount of real-world data, unexpected events can still happen, as seen in the video. 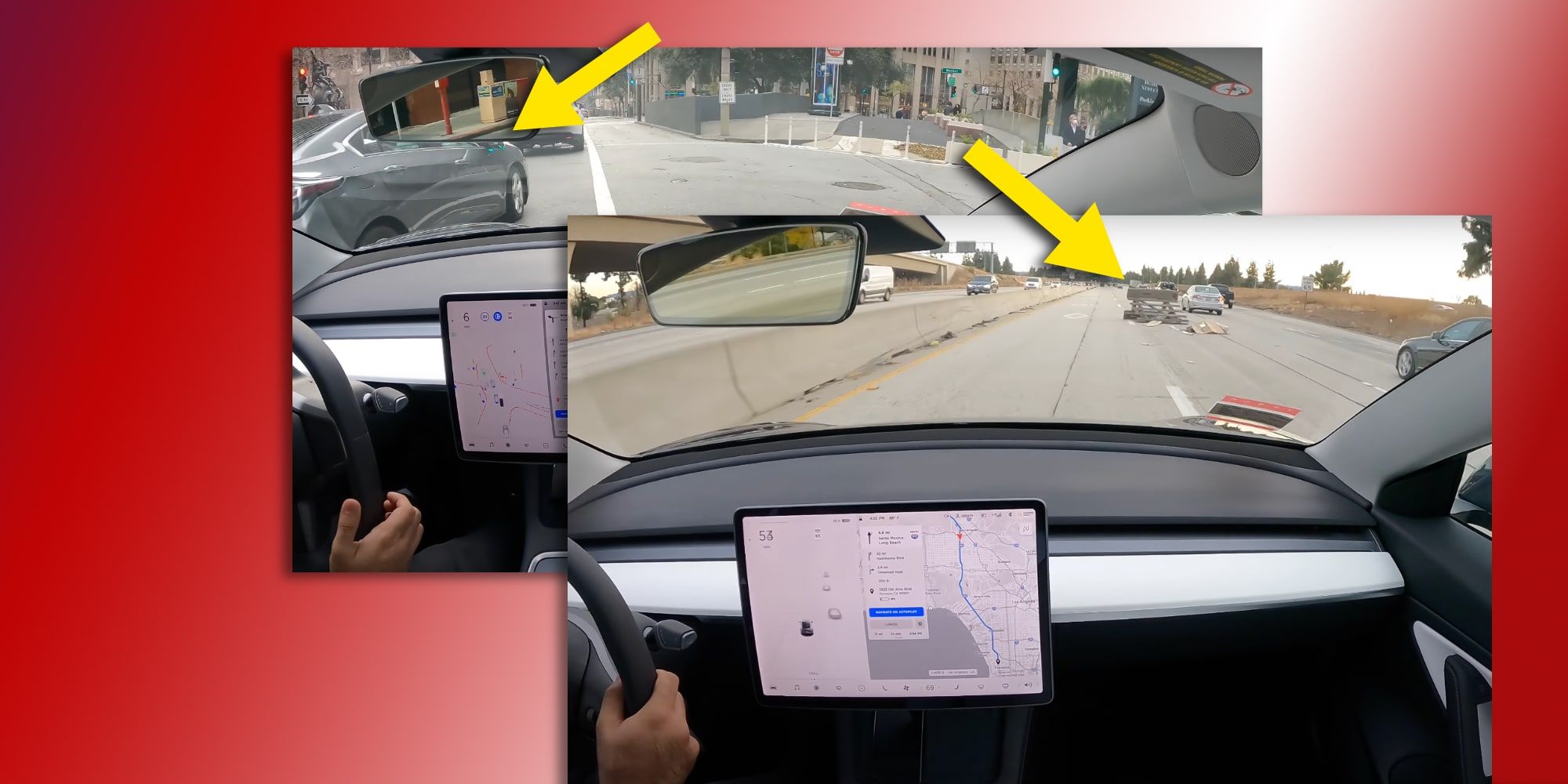 Since this is a beta version of Tesla’s Full Self-Driving system, this was a rare opportunity to observe how the system handles various situations. It managed driving on highway and city streets very, very well. However, there were a couple of instances that revealed the car might not be quite ready to operate without an attentive human driver. Near the beginning of the trip (at around the 1:21 mark in the video), an intersection at Market Street presents an unusual, angled intersection and busy city traffic with pedestrians.

FSD handled the pedestrians with no trouble, but when the light changed and traffic started moving, the computer seemed confused by the lane markings and drifted left toward an adjacent vehicle. The driver’s hand is seen ready at the wheel and appears to grip it briefly, before releasing. FSD takes a moment to correct and understand the lanes, then proceeds along normally. Given that Tesla prioritizes drivable space over lane lines, there was probably no danger of a collision. The cars were never really close to colliding, but crossing the lane lines in that situation is different from how a human driver may have reacted and could have been startling for other drivers.

The second event occurs at 12:52 in the video and when traveling over 70 miles-per-hour. A car in front of the Tesla brakes and swerves around what appears to be a tipped over wooden road barrier. The Tesla driver takes control briefly, steering around the hazard that occupied the entire center lane, before re-engaging self-driving. Perhaps FSD would have detected this, but nothing on the display indicated awareness of the danger and there isn’t much time to correct when traveling at highway speeds.

Expecting even the latest version of Tesla’s advanced FSD to take over driving completely would be a dangerous mistake. Unfortunately, some drivers have already put too much faith in the less advanced Tesla Autopilot and collisions have resulted. No one wants this program to face regulatory issues because of bad behavior by irresponsible owners and even though it will take more time, the advances so far are remarkable. With Tesla Full Self-Driving becoming available to even more vehicles in 2021, it’s important to celebrate this glimpse of the future, while keeping in mind the limitations.

Next: When Is Tesla’s Full Self-Driving Subscription Coming? Buy Or Subscribe?